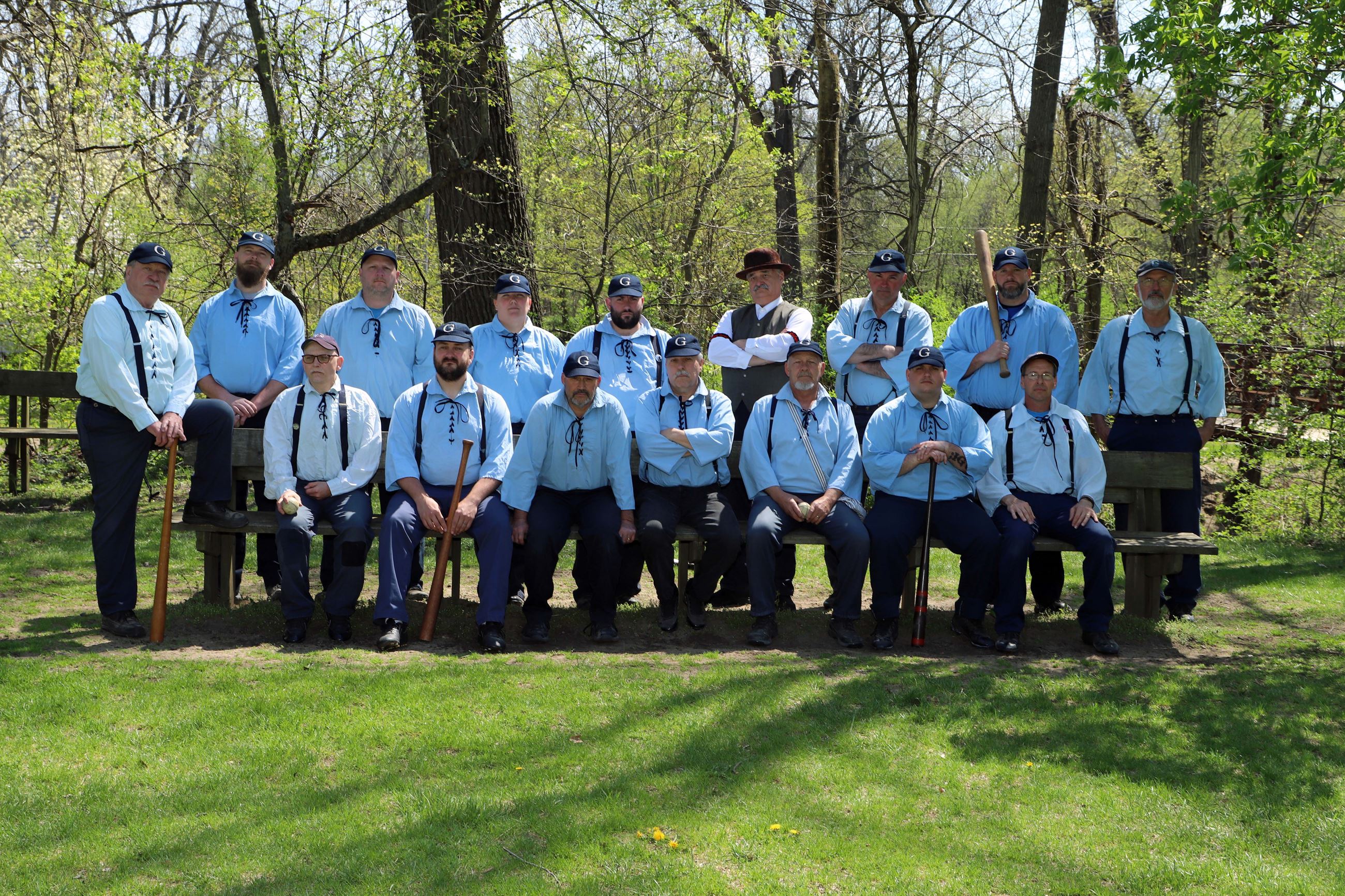 Home games are played on Grinder Field at 2 p.m., across the river from Wood's Mill at Deep River County Park. They are free and suitable for the entire family.

“Extra, Extra, Extra” Get your Deep River Register hot off the presses at each home game on sale for only one penny. Chock-full of Grinder details, little known facts, and Deep River General Store coupon it is money well spent. 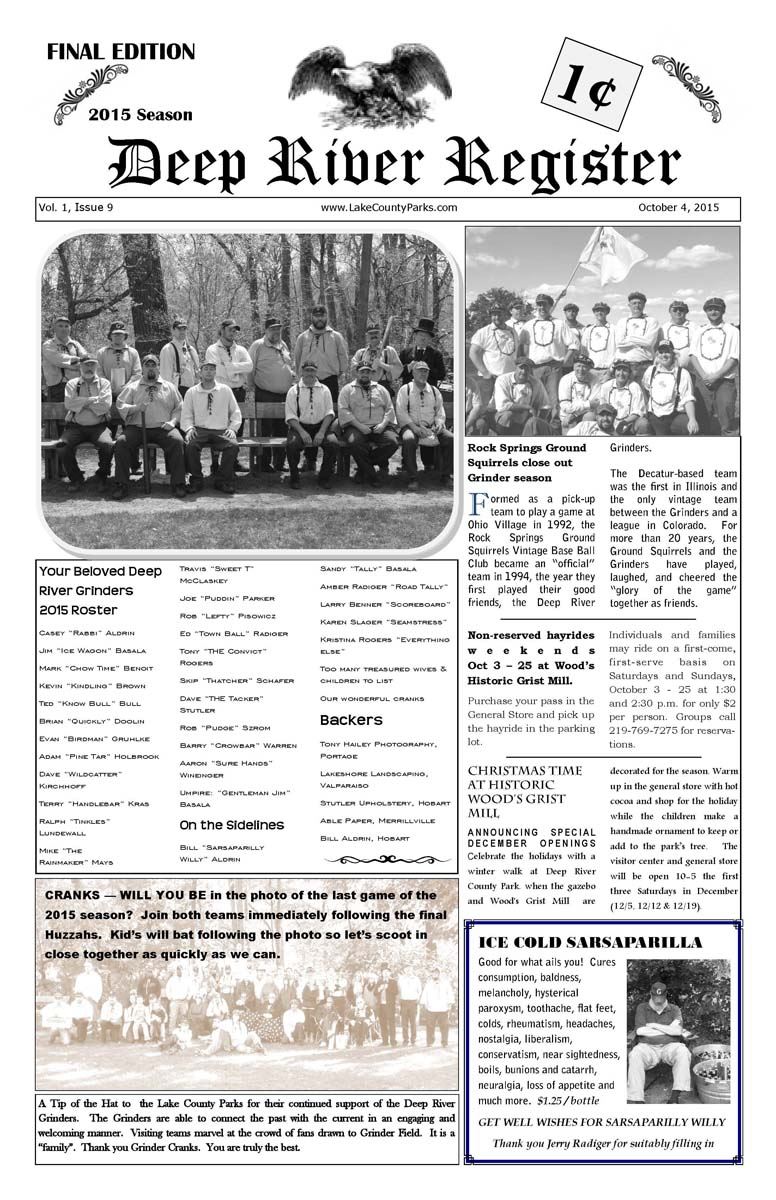 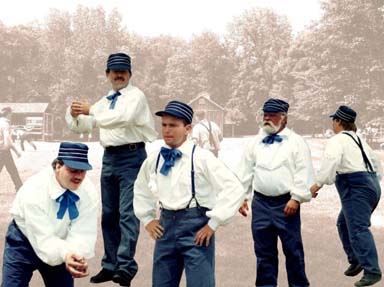 The Deep River Grinders have been playing baseball by the original rules of 1858 (PDF) since they visited the Ohio Village Muffins in 1991.

It’s more than the sport that entices players to join the Grinders. It’s the spirit of the game, the gentlemanly competition, and the friendly connection with their cranks. Routinely playing to a home audience of 200 or more spectators lining the sidelines and outfield, Grinder games are like a great big family reunion even for newcomers.

The Grinders are proud to be charter members of the Vintage Base Ball Association, a national organization formed to preserve, promote, and perpetuate the game of baseball as it was played in its formative years in the mid-nineteenth century.

Following each home game children line up to take their turn at bat and run the base paths while Grinders play the field.  One little guy told the players, “When I grow up I want to be a Grinder.”  Isn’t that what base ball is all about?  Don’t miss this year’s Deep River Grinders games. They are a treat for young and not-so-young alike.

It was a beautiful Sunday afternoon when cranks (fans) heard the umpire declare, “striker to the plate” and the match began.  It was unlike most games of base ball, as it’s limited to the original 37 rules of 1858. The striker is out if the ball is caught on the fly or on one bound, fair or foul.  There are no called balls and strikes, and the Rover (shortstop) may play anywhere on the field.

So when the first warm days of spring arrive, the players are eager to meet on Grinder Field for practices. Then the games begin, both at home and away. The team travels to Michigan, Ohio, Illinois and throughout Indiana playing their special game of vintage base ball. Other teams from around the Midwest journey to Grinders field for re-matches.

What is so special about this game? That's easy. It's the gentlemanly behavior of the players and the rules they play by. The men portray players of the mid-1800s, when courtesy prevailed on and off the playing field. There is no swearing, no spitting and no ungentlemanly behavior anywhere during the games.

Some differences in the rules of today that cranks (fans) might notice are: no bunting, no sliding into bases, no leading off and no mitts or other protective gear. Players are called hurlers (pitchers), behinds (catchers) and rovers (shortstops). Nine players at a time take the field and substitutions are made freely. Strikers (batters) are encouraged to strike the ball and "Leg it" to first base 90-feet away. Then if the runner is lucky enough to cross home plate safely, he is to proceed to the tally table where he asks that his ace be tallied for his team. He is then instructed to ring the tally bell, letting players and cranks know his score has counted.

Since this game was originally played for exercise instead of competition, friendly banter can be heard between the teams. Phrases such as "Hit a daisy cutter, Sir," and "Well done," are often shouted to opposing team members. Come enjoy this vintage sport, sip an ice cold sarsaparilla, munch a hotdog and join in shouting "Huzzah" for both teams. 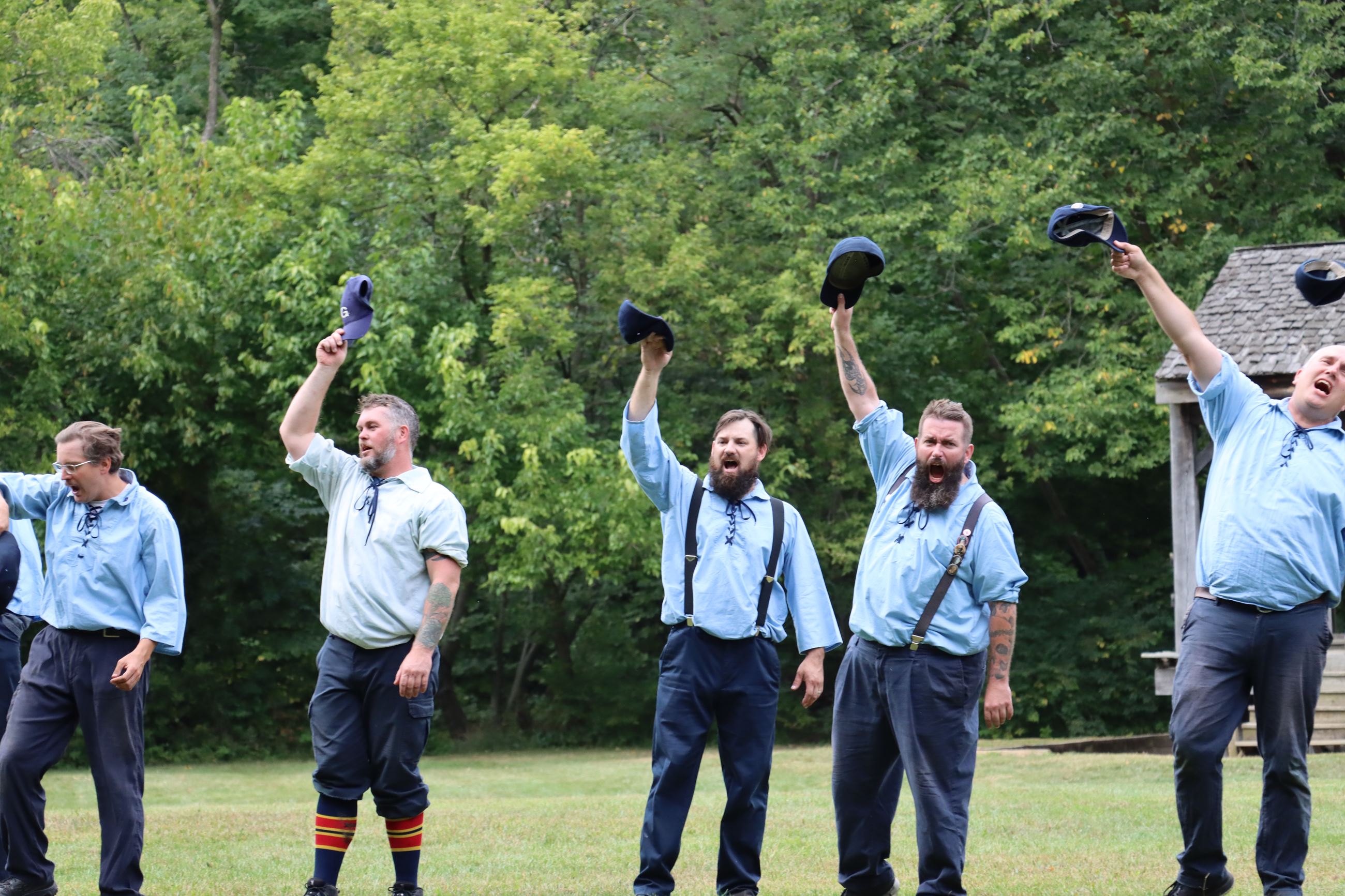 If you've seen a match, you know that they play barehanded and follow the maxims of gentlemanly behavior - no spitting, arguing, cursing, or wagering. It is commonplace for members of both teams to encourage and applaud the good play of each other. Games are played, as they were in baseball's infancy, more as recreation and exercise than competition. The Deep River Grinders truly play for the love of the game, using leather-covered hand-sewn hard balls, hand-turned bats, and homemade bases. Nine-inning games are played on ninety-foot base paths. Cranks (you, the fans) can purchase an ice cold sarsaparilla, the official drink of the Deep River Grinders, relax, and shout “Huzzah!” for good plays from both teams. Don't let Sarsaparilla Willy fall asleep on the job. Purchase your ice cold treat from him behind the score keeper's table.